FROM THE YELLIN CENTER NEWSLETTER - SPRING 2015 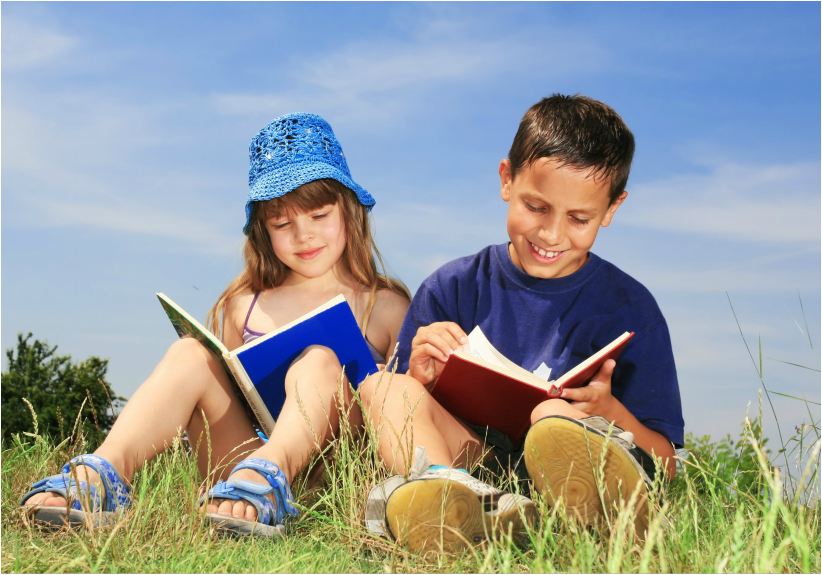 Many students receive summer reading assignments from school. In addition to reading the required texts, students are often expected to write book reports or keep reading logs, prospects that many make kids, understandably, groan. In our view, summer reading should be pleasurable. Kids should use texts they enjoy to keep up good reading habits.

Here are some suggestions for excellent summer reads, organized by grade level. We chose books with themes (animals, sports, etc.) and qualities (e.g. humor, adventure) that young people tend to enjoy. To make the list easier to navigate, we included a few words about genre and key themes after each title.

We think the content of the books matches the age we've indicated. Concerned parents should preview them first, though, particularly our choices for high school students.

The Littlest Leaguer by Syd Hoff (humor, sports)
It seems that Harold is too small to do anything right on the ball field, but he is finally able to show his team how useful he can be.

The Goliath series by Terrance Dicks (animals, series)
This charming series tells the tale of the friendship and adventures of David and his tiny puppy, which grew far larger than anyone ever imagined.

The Moomintroll series by Tove Jansson (adventure, series)
Your child will be enchanted by the tremendously creative characters, and their adventures, in these Swedish novels.

Babe, Martin's Mice, and other books by Dick King Smith (animals)
From pigs to parrots to unlikely friendships between a mouse and a cat, Smith is one of the most masterful animal story writers around.

The My Father's Dragon series by Ruth Stiles Gannett (adventure, animals, humor, series)
Follow young Elmer Elevator as he cleverly skirts a series of perils to rescue a baby dragon kept captive on an island.

The Mouse and the Motorcycle series by Beverly Cleary (adventure, animals, humor, series)
When a boy brings a toy motorcycle into his hotel room, Ralph the mouse can't resist the urge to take it for a spin.

Rascal by Sterling North (animals, humor)
This irresistible memoir tells the tale of the mischievous baby raccoon the author adopted when he was a boy.

Al Capone Does My Shirts by Gennifer Cholodenko (humor)
Set on Alcatraz while it was still a working prison, this clever, engaging book tells the tale of the guards' children who lived outside the walls.

Heat and other sports books by Mike Lupica (sports)
Well-written sports books are tough to come by, so Heat, about baseball and family, is true gem.

The Hatchet series by Gary Paulson (adventure, series)
Young people, especially boys, will be captivated by the realistic story of Brian, a boy who must survive alone in the wilderness after a plane crash.

The Wednesday Wars by Gary D. Schmidt (humor)
This masterful book, about a middle school boy's battle with his unforgettable English teacher literally made us both laugh and cry (but mostly laugh).

Persepolis by Marjane Satrapi (graphic novel)
This searing memoir of growing up in Tehran during the Islamic Revolution has been "written" in graphic form.

All Things Bright and Beautiful and other books by James Herriot (animals)
Herriot's humorous, warm, and poignant memoirs about practicing veterinary medicine on Scottish farms are timeless.


Life of Pi by Yann Martel (animals, adventure)
Having survived a shipwreck, teenage Pi must now survive a voyage in a lifeboat with his fellow castaway: a full-grown tiger.

Flowers for Algernon by Daniel Keyes
This thought-provoking page-turner takes the form of a journal kept by Charlie who underwent an experimental brain surgery to turn him from a simple-minded man to a genius.

The Watchmen series by Alan Moore (adventure, graphic novel, series)
Don't be fooled by the format; the superheroes in this graphic novel wrestle with some age-old questions.

Behind the Beautiful Forevers by Katharine Boo
Set in a slum in Mumbai, India, this unforgettable book provides an unflinchingly intimate portrait of the inhabitants, with all their tragedy and grace.

What is the What by Dave Eggers (adventure)
This worthy book is based on the life of Valentino Deng, a Sudanese refugee who was forced to fight as a child soldier and later became part of the Lost Boys of Sudan program.

Into the Wild by Jon Krakauer (adventure)
Krakauer is as spell-binding as always in this fascinating exploration of a most intriguing young man's search for himself.

Friday Night Lights by H.G. Bissinger (sports)
Bissinger is a Pulitzer-prize-winning journalist, and his coverage of high school football in a small Texas town is riveting.

My Losing Season by Pat Conroy (sports)
Conroy's fierce memoir tells the story of his senior year playing basketball for the Citadel.


We'd like to share two more additional insights before you head to the library. First, whenever possible try to start your child on series. You can breathe a sigh of relief when he finds one he likes: no more scrambling to find a book for him to tackle next!

Second, don't fixate on reading level. Summer reading should be enriching and enjoyable, and kids should select books they can read easily on their own. Remember that independent reading levels (i.e. what kids can read by themselves) and instructional reading levels (i.e. what kids can read with support) generally don't match up. For example, if your student will be starting third grade, her instructional reading level may be nearly at the third grade level, but it's likely that her independent reading level is lower – maybe still somewhere in second grade. This is to be expected. Let her choose books easy enough to handle without the support of an adult.